Epilepsy is a complex condition that makes a child susceptible to seizures. Seizures result from abnormal electrical activity in the brain: Some parts of the brain get over-excited and fire off too many electrical signals.

Epilepsy affects about 1 percent of children. It is sometimes caused by an underlying disease, injury or brain development disorder, but it often seems to appear out of nowhere. A child may have epilepsy if they have had two or more unprovoked seizures, meaning there is no detectable immediate cause of the seizures such as a high fever.

Epilepsy can involve many different types of seizures: Some are easy to recognize, when your child’s body shakes and they become temporarily less aware. Other seizures don’t have any obvious outward signs at all.

Epilepsy sometimes can cause changes in behavior and personality or lead to other neurological problems, learning difficulties, or depression and anxiety. Identifying these sorts of problems and intervening early are important aspects of caring for a child with epilepsy. Some doctors are starting to use the term “epilepsy spectrum disorder” to reflect how complex epilepsy can be. 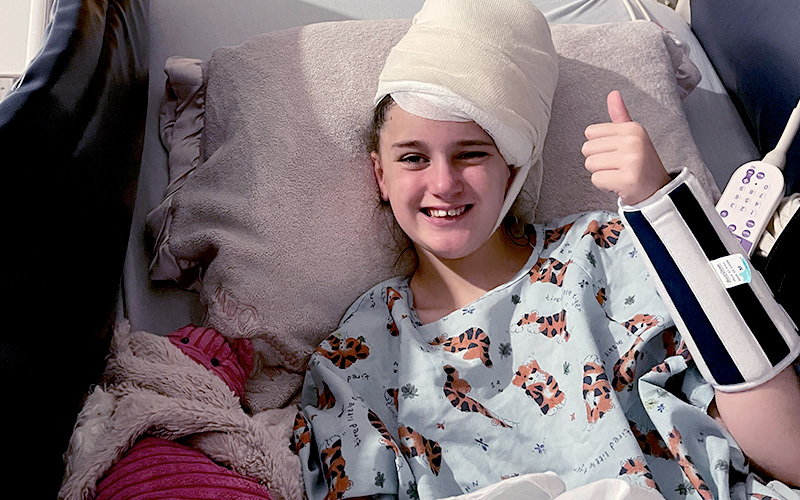 Children come from across the U.S. and beyond for epilepsy treatment at Boston Children's Hospital.

What are the symptoms of epilepsy?

Epilepsy can have a profound effect on a child’s life. Some children may fall or get injured during a seizure, and the episode can leave your child exhausted. The abnormal brain activity that happens during a seizure can sometimes cause damage to the brain. This is a special concern in children because their brains are still growing and changing.

Because the brain controls all aspects of the body, seizures can have many different effects on a child depending on where in the brain the abnormal electrical activity occurs. Seizures can be subtle and barely noticeable or frightening to witness.

A seizure happens when cells in the brain fire or “talk” too much, temporarily disrupting the brain’s normal electrical signals. Epilepsy and seizures have many possible causes, including:

In more than half of children, however, a cause cannot be found.

How is epilepsy diagnosed?

Many conditions other than epilepsy — such as stroke, fainting, problems with heartbeat or breath-holding spells — can cause symptoms that sometimes look like seizures. If you think your child has epilepsy, a neurologist will review your child’s medical history, perform a complete physical exam and may order some testing.

The main test used to diagnose epilepsy is an electroencephalogram (EEG), which measures electrical activity in the brain. A high-definition EEG allows clinicians to get a more detailed picture of your child’s brain activity.

Your child’s neurologist may also refer your child for other testing, which may include:

These tests help the neurologist diagnose which of the two main types of epilepsy your child has. A child with focal onset (previously known as partial) epilepsy has seizures that have onset on one side of the brain. Children with generalized epilepsy have seizures that appear to begin over both sides of the brain.

While diagnosing the epilepsy itself, physicians will also watch for related problems, such as learning or behavior difficulties or depression. Neuropsychologists can conduct specialized testing to monitor your child’s cognitive abilities, learning, behavior, emotional well-being and social function. This will help in developing strategies so your child can function at the highest possible level.

How is epilepsy treated?

Epilepsy is a complex condition that affects each child in a different way. This means there’s no one treatment that works for every child with epilepsy. Common therapeutic approaches include medication, surgery and dietary changes.

Medication remains the first line of treatment for epilepsy. There are many types of medications to treat seizures, including newer medications that have been developed over the past few decades. This gives your child’s doctor many options for treating seizures when traditional first-line medications don’t work.

Diet therapy can sometimes be a good option for childhood epilepsy when medications don’t control seizures or cause intolerable side effects. It can be especially helpful for certain types of epilepsy, such as myoclonic astatic epilepsy (Doose syndrome).

A number of different diets can be used for epilepsy. These include the Classic Ketogenic Diet, the Modified Atkins Diet, the Medium Chain Triglyceride Diet and the Low Glycemic Index Treatment Diet. Which diet is best for your child will depend on the epilepsy diagnosis, your child’s age and eating habits, and family needs and preferences. It is possible and sometimes helpful to transition between the various diets.

Diet therapy takes a strong commitment, but it may offer children a better chance of seizure control than trying a new medication. Because there isn’t yet a good way to tell exactly how a child will respond to diet therapy, a trial of three to four months is usually recommended.

In its strictest form, the ketogenic diet provides more than 90 percent of its calories through fat (compared to the 25 to 40 percent usually recommended for children). When the body burns fat for energy, rather than glucose from carbohydrates, it produces compounds known as ketone bodies. The increase in ketones is called ketosis. Experts believe ketosis reduces seizure activity in the brain, although exactly how this works is still unknown.

Though the diet is challenging, it’s easier than it used to be. As interest in the diet has increased, “keto-friendly” products have become more widely available. These include coconut oil, low-carbohydrate noodles, sugar-free syrups and flavorings, and nut flours.

The ketogenic diet is highly precise and restrictive. Because it can cause side effects, it should only be started under medical supervision. Before starting on the ketogenic diet, clinicians will assess your child’s nutritional status, diet preferences and calorie needs. If the diet seems like it will be feasible for your family, they will customize it to your child to achieve the best seizure control while meeting daily energy and nutrient needs. In some cases your child may start the diet while in the hospital. Special ketogenic formulas are available for infants or children who need to be fed though a tube.

Because ketogenic diets are not nutritionally balanced, children will need to take vitamin and mineral supplements. Clinicians will also need to check your child’s ketone levels periodically and may need to change the diet to maintain ketosis.

Children usually stay on the diet for about two years. At that point, your child will slowly transition back to a regular diet, and some children are able to remain seizure-free.

This approach, also known as neuromodulation, is beginning to be tested as a treatment for drug-resistant epilepsy that cannot be effectively or safely treated with surgery. It applies a magnet or small electrical currents to the scalp, changing brain excitability. There are two main types of brain stimulation:

When seizures don’t respond to medication or other treatments, your child’s doctor may recommend an evaluation to see if surgery is an option. Surgical evaluations are done in the hospital over five to seven days. During this time, clinicians will study your child’s seizures and learn exactly what area of the brain they are coming from. If surgery is an option for your child, the care team will discuss what type of surgery they recommend. These may include:

If your child's seizures are not well managed by existing therapies, your care team may recommend enrolling in a clinical trial of a new drug or other experimental treatment. Being in a study sometimes means that your child has a 50-50 chance of receiving the new treatment, at least in the beginning. Each study has different ground rules, so it’s worth inquiring.

How we care for epilepsy

Most children with epilepsy can achieve good seizure control with treatment, and some can live seizure-free. Treatments for epilepsy have expanded greatly in recent years to include many new medications, specialized diets and a wide range of surgical strategies. A new technique, noninvasive brain stimulation, is also being studied. Finding a treatment approach that works for your child can involve some trial and error.

For this reason, the Epilepsy Center at Boston Children’s Hospital provides individualized care for your child from a team of specialists from the most experienced neurology and neurosurgery programs in the United States. We work with you to create the most appropriate and effective treatment plan based on your child’s unique case.

The Department of Neurology cares for infants, children, and adolescents with all types of neurologic and developmental disorders.

The Department of Neurosurgery serves children with disorders of the brain, spine, and nervous system.

The Sturge-Weber Clinic cares for children who have this rare, congenital disorder that is often characterized by a port-wine birthmark on the child’s face.

The Rett Syndrome Program is the only specialized Rett syndrome program in New England.

Learn about the Clinical MEG Service at Boston Children's Hospital.

The Epilepsy Center offers comprehensive diagnosis and care for children with epilepsy.

The Epilepsy Genetics Program works with children and families with known or suspected genetic epilepsy syndromes.

Care for Children with Medical Complexity

Learn more about Care for Children with Medical Complexity