What is limb lengthening?

Limb lengthening is a surgical treatment that can reduce or correct limb-length discrepancies. The treatment increases the length of a bone in a patient’s arm or leg while also stretching the surrounding muscles, tendons, and ligaments.

Limb lengthening is a time-consuming and physically demanding process for both patients and families. It is important to fully understand the procedure, possible complications, and other treatment options so you can decide which treatment is the right choice for your child and for you.

How does limb lengthening work?

In the first stage, a surgeon cuts the bone to be lengthened. This is done in a very specific way to preserve blood flow and other biological processes that help bones heal. Once the bone has been cut, the surgeon attaches a lengthening device to the limb. This device will be used to create a gap in the bone during the next stage.

Patients typically stay in the hospital for at least one night after this procedure. The second stage typically begins after their limb has had a week to 10 days of rest.

During the second stage, the two ends of bone are gradually separated, stimulating new bone to grow and fill in the gap created during the lengthening. This stage typically takes up to two months.

Throughout this stage, the surgical team will carefully monitor the bone and surrounding muscles, tissues, and nerves. If they see any sign of possible complications, they may decide to pause the process or change how slowly or quickly the bone is being lengthened.

Once the limb has reached its planned length, the body’s natural healing process continues to fill the gap with new bone. Meanwhile, the nerves, muscles, tendons, and ligaments around the bone adjust to the new length. 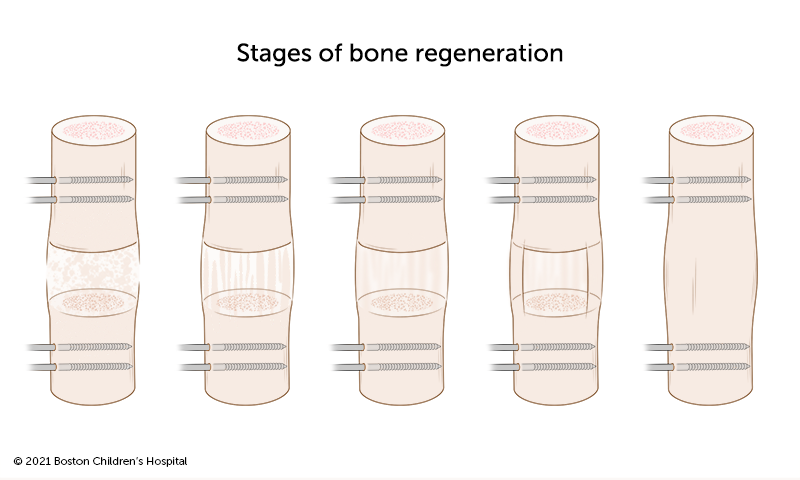 Physical or occupational therapy during the second and third stages are important to maintain mobility of the joints and muscles around the lengthening bone.

What types of devices are used for limb lengthening?

Limbs can be lengthened with an external frame or an internal lengthening rod. Before the surgery, your family and your child’s surgeon will decide which type of device will work best for your child. 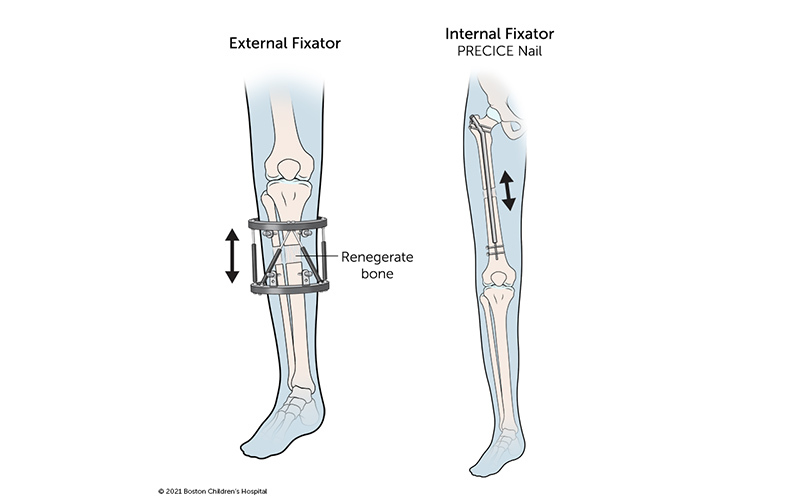 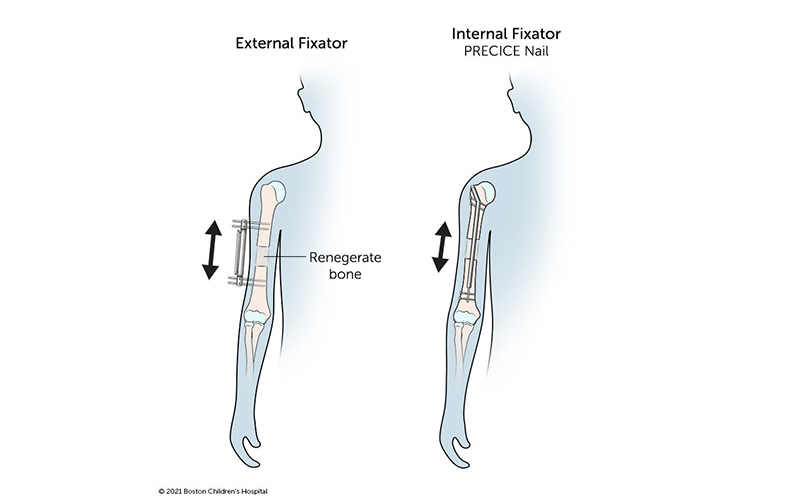 How long does it take to lengthen a limb?

Limb lengthening can take six to nine months, and sometimes longer. The amount of time depends on many factors, starting with how much the limb will be lengthened.

In most cases, limbs are lengthened at a rate of one millimeter per day. A millimeter is about the same width as the tip of a pencil. At this rate, lengthening a limb 50 millimeters (two inches) takes 50 days.

The process may take more or less time depending on how your child’s bone, joints, and tissues respond to being lengthened. If new bone is growing more slowly or more quickly than planned, your child’s surgeon may slow down or speed up the lengthening process. If your child’s joints become stiff, or if their surgeon detects signs of nerve, tendon, or ligament damage, the surgeon may temporarily pause the lengthening and give the limb time to rest.

The bone consolidation stage typically takes twice as long as the lengthening stage. If lengthening took two months, it would take four months for new bone to consolidate and become strong enough for your child to put their full weight on their leg or lift objects with their arm.

How much can a bone be lengthened?

The amount of lengthening depends on many factors, including your child’s age, which limb needs to be lengthened (arm or leg), and the length of that limb.

These are general guidelines. Your child’s surgeon will recommend a length increase based on your child’s unique condition.

Arms and legs are lengthened in similar ways, however, there are a couple of differences.

Are there complications of limb lengthening?

Limb lengthening is a complex procedure with a high rate of complications. One of the most common complications is infection around the pins that attach the device to the bone. This is not an issue with internal fixators, which do not use pins. 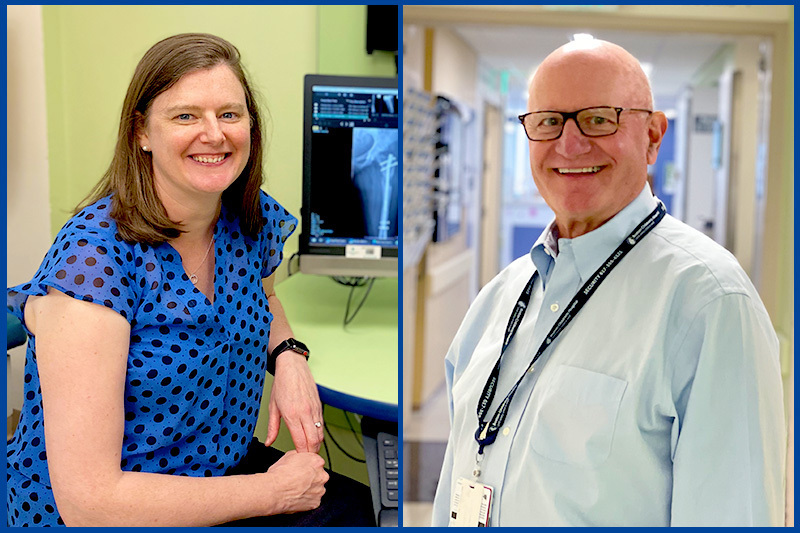 Limb-lengthening surgery: A look at the pros and cons

Other complications are more serious. It is important to fully understand the risks of limb lengthening before committing to the process.

Your child will need to be seen by their surgeon frequently throughout the lengthening process. The surgeon will monitor your child’s bone and surrounding tissues and intervene quickly if they see signs of complications.

Many children experience pain in their limb for the first few weeks after surgery. Your child’s clinical team will help you manage your child’s pain until it subsides.

The lengthening itself is not painful for most patients, though your child’s muscles may feel sore or tight. Physical therapy or occupational therapy (depending on your child’s age) will help stretch the tissues in the limb and maintain mobility of your child’s joints.

Who is a good candidate for limb lengthening?

You, your family, and your child’s surgeon should consider several factors when deciding if limb lengthening is a good choice.

How active can children be after limb lengthening?

However, once new bone has grown in and fully formed, it is typically just as strong as other bones in a child’s body. Your child should be able to be as active as they wish, without worrying about breaking or compromising the new bone.

Our expertise in limb lengthening

The specialists in the Limb Lengthening and Reconstruction Program at Boston Children’s use advanced techniques to care for patients with complex limb differences. We provide comprehensive care for children and young adults with arm or leg differences that are present at birth as well as those caused by trauma, bone infection, or developmental deformity.

Our team of specialists includes surgeons with expertise in both lower limb and upper limb differences. Our team also includes physician assistants, nurse practitioners, and physical and occupational therapists who specialize in limb-length differences.

Childhood growing patterns can impact the lengthening process. We understand these growing patterns and how to tailor treatments so our patients can achieve maximum limb function throughout their lifetimes. In many cases, we remain involved in our patients’ care from early childhood through early adulthood.

We understand that any limb lengthening or reconstruction is a challenging procedure with inherent risks. We therefore take a thoughtful approach to ensuring our patients and their families fully understand all their options so they can choose a treatment that’s right for them.

Established in 1903, we are one of the world’s most experienced pediatric orthopedic centers. Learn more.

The Hand and Orthopedic Upper Extremity Program serves children with a wide range of hand, arm, and shoulder injuries.