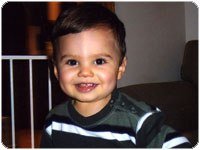 When your hands are deformed or disabled, even the simplest tasks, such as eating, dressing, and writing, are incredibly difficult.

So when Aaron Connolly was born with a deformed hand due to amniotic band syndrome (ABS) nearly two years ago, his parents, Ed and Mary, were understandably concerned. "When we saw Aaron's hand, we didn't know what to think," says Mary. "His fingers were so swollen - we didn't know if he'd be able to keep them."

ABS, also known as constriction band syndrome, is a congenital disorder that occurs in about 1 in every 10,000-15,000 babies when fibrous bands of the amniotic sac become entangled around a developing fetus. In some cases, the bands wrap around the fetus' head or umbilical cord, causing a miscarriage. More commonly though, the bands wrap around a limb, fingers or toes, creating severe constrictions.

Depending on its intensity, a constriction may result in nothing more than an unsightly, circumferential cleft extending around a digit or limb. However, deeper bands can cause severe swelling, cut off of lymphatic or venous flow and interfere with development of the appendage. If a band is tight enough, the constriction may even cause an in utero amputation of the appendage.

Aaron's condition was a moderate case of ABS that affected the fingers on his left hand. Constriction rings caused his index, middle and ring fingers to become misshapen and swollen. The rings also caused his pinky finger to be partially amputated in utero. Fortunately, the underlying bones in his other fingers were unaffected.

Shortly after Aaron was born at nearby Brigham and Women's Hospital, the Connolly's met with Boston Children's Hospital reconstructive plastic surgeon Brian Labow, MD, who specializes in treating congenital hand anomalies. "We perform surgery immediately if the constriction bands cause severe swelling and diminished circulation," says Dr. Labow. "In Aaron's case, his fingers were not threatened, and we were able to defer surgery until he was 6 months old."

Because so many of Aaron's fingers were affected, some having more than one ring, Dr. Labow staged his treatment over three separate operations. During the first surgery, Dr. Labow excised the single constriction band on Aaron's index finger and removed the bands near the ends of Aaron's middle and ring fingers. A few months later, Dr. Labow removed the remaining constriction bands on Aaron's middle and ring fingers. He also debulked and contoured the subcutaneous tissue in an effort to make the hand appear more normal.

This type of surgery is designed to improve both the appearance and function of the hand. "We recognize the social elements involved in pediatric hand surgery," says Dr. Labow. "Our hands are an important part of our daily social interactions. They're out in the open for everyone to see, so an essential part of these operations has been making Aaron's hand as symmetrical as possible with his unaffected hand."

Dr. Labow says that Aaron will likely have excellent long-term function of his hand, although annual check-ups will be necessary to examine his hand as it continues to grow. "Follow-up is an essential part of the process," he says. "You have to evaluate the affect that the disease and surgery have had on the growth and development of the child's hand, and conversely, the effect that growth has on the function and appearance of hand. These are not operations you perform and feel that you're done. The hand grows throughout childhood and is called upon to perform progressively intricate tasks. You have to constantly evaluate whether additional surgery is required."

In Aaron's case, the operations have gone well and his hand is improving. This past September, he had his third operation, this time to repair his pinky. Additional operations may be required in the future. In the meantime, Aaron will undergo occupational therapy to help him use his hand, to soften scars and to decrease any remaining swelling.

"I'm pleased with Aaron's progress," says Dr. Labow. "I've known him from the first hour of his life. One of the best parts of my practice is the satisfaction of watching kids like Aaron grow and develop and recognizing the impact that surgery has had in their lives."